This interesting paper is one part of a larger body of research looking at olfactory linguistic terms in the Aslian language groups. I originally came across this topic on the Neuroanthropology blog. The human sense of smell has long been thought to be the weakest of the human senses – an evolutionary caste off as our ancestors became much more vision orientated (e.g. see Pinker 1997 who refers to it as a vestigial organ). On a variety of tests of the olfactory senses, WEIRDs do incredibly badly [WEIRDs = the tendency of psychology to focus on participants who are Western, Educated, Industrialised, Rich, and Democratic]. In this paper Ewelina Wnuk and Asifa Majid outline three sets of experimental findings with the Maniq people who live in Thailand, which put serious pressure on the claim that the human sense of smell is innately poor. Indeed, these findings can be seen as part of the wider enculturated cognition project which is putting pressure on both the traditional stances of universalism in mainstream psychology and innate modularism of the Santa Barbara school of evolutionary psychology. I.e. this paper contributes to a growing body of literature that [1] testifies to the stunning cognitive diversity in our species, and [2] show how much of this is driven by the acquisition of cultural practices in an extended developmental period and niche.

I will first summarise the paper and then briefly discuss more recent work connected to this.

The point can be simply made by comparing English smell terms with Maniq smell terms. In English our smell terms are, for the most part, source dependent: i.e. describe smells based on their source (e.g smells like coffee, lemon-scented, etc.). In contrast, Maniq terms for smells are independent of the source and are instead abstract and generalisable. One could draw a comparison to English words for colour here to make this clearer. In English, we do not need to describe a colour with reference to its source (although we can do). So, for example, one can state that something is red or yellow without having to indicate the source (strawberry or cheese), and these terms can also be used with a high degree of agreement between language users in an abstract manner to refer to a wide range of otherwise unrelated objects. I.e. Maniq speakers can refer to smells in as clinical and coherent a manner as English speakers can discuss colours without any reference to the source.

So, there is both coherency and accuracy amongst the speakers in how they discuss smell. Wnuk and Majid tested Manniq speakers using three differing tests to show that their use of smell terms is highly accurate and abstract – thus going against arguments by evolutionary psychologists and others that human olfaction is an almost vestigial or obsolete sensory domain. Briefly, these tests were:

1. Exemplar listing: Participants were interviewed on the topic of smell with the aim of uncovering what were the best exemplars of each smell term. These interviews also aimed to identify how many different objects participants could readily identify as smelling X (for fifteen terms – see table below). Wnuk and Majid note that exemplar listings are usually done with concrete objects; whereas this task involved abstract concepts and so was more cognitively demanding. This experiment showed that Maniq smell terms have a wide range of applications and that there is agreement in what they are. Interestingly, they also found there is commonality between the exemplar listing of Manniq speakers and the smell terms of a related language spoken in Malaysia: Jahai (I discuss this more at the end of this review). 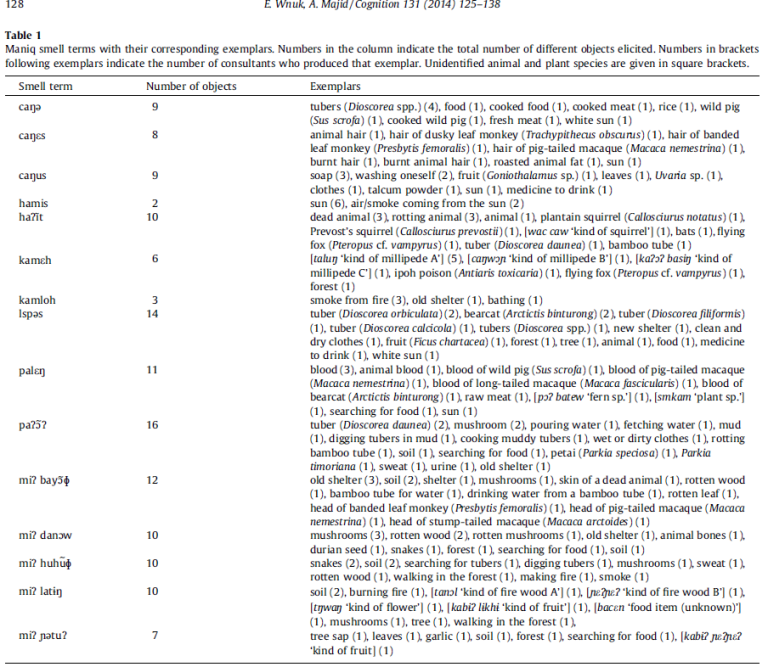 2. Similarity judgement: participants were presented with three differing smell terms and asked which one was the odd one out. A complete set of triads for the 15 smell terms = 455 triads! This is too infeasible and so instead they tried to balance blocks of 35 triads. This experiment showed that the odor lexicon of the Maniq is coherently structured in two dimensions (pleasantness and dangerousness). And combined with the previous experiment shows that there is a cultural consensus on how these olfaction terms are being used. This is particularly interesting in the light of our recent discussion of Lisa Feldman Barrett’s recent work on emotion which indicates that it is culturally constructed from a more basal affective response to the world as either arousing and aversion.

3. Off-line rating: participants were tested were tested various odors using an 8 point scale for: pleasantness, edibility, familiarity, dangerousness, cosmetic value, and intensity. The participants were given the verbal term for a particular smell and then asked to rate the verbal term using the 8 point scale for the variables listed above. Crucially, participants indicated the strength of their response by pointing to circles of increasing size. Wnuk and Majid reflect that this metaphor was perhaps not understood by the participants, and several members in the group discussion were puzzled by the analogous linkage of increasing size and how this would correlate with these variables (i.e. in what way is a more desirable smell akin to a larger quantity or larger area? Is it because one wants more? But then how does this flip for dangerousness? This is a particularly interesting puzzle given that Wnuk and Majid argue that their findings suggest that pleasantness and dangerousness are not opposites). Nonetheless, the results of this experiment matched with experiment 2 in suggesting that the olfaction terms can be organised into two major dimensions: pleasantness and dangerousness. Importantly, this experiment showed that these two notions are not the inverse of each other but are distinct ways of categorising smells that can either overlap or perhaps even be orthogonal to one another.

Despite these experiments suggesting the two dimensional taxonomy, Wnuk and Majid are keen to stress that Maniq smell terms cannot just be reduced to ‘foul/fragrant’ and are far more complex in how they are deployed regularly in every day life for a wide range of social and cognitive aspects. Instead, by combining these experiments with ethnographic data they note that: “Smell is an important part of the indigenous concepts of well-being and safety, and therefore it is intertwined with knowledge from other domains, such as ethnobiology, natural phenomena, and the supernatural world” (2014, p. 134)

The Maniq language provides compelling evidence against the universal paucity of olfactory vocabulary. And this evidence is made stronger by the fact that there are several other cultures around the world which also have robust smell-orientated cultures. By paying attention to this cognitive diversity we make headway in understanding human olfaction. I shall now briefly discuss three more studies that demonstrate this point.

Majid and colleagues (2018) have recently pushed this work further. This particular paper focuses on abstract terms for olfaction across cultures – this is of particular importance given that many WEIRD languages lack abstract terms for smells (and perhaps hence the dismissal “From Plato to Pinker” (Majid & Burenhult 2014) of the human sense of smell). Majid and colleagues note that odor is a particularly tricky phenomena to attach a label given how ephemeral and unstable smell can be in both space and time. In this paper Majid and colleagues compared the performance of Dutch and Jahai speakers in olfaction tests. They found that the former mostly relied on smell terms related to source, whereas the Jahai speakers discussed the smells in abstract terms (see table below from Majid et al 2018, p. 5). Additionally, the Jahai participants’ responses were quicker and shorter – which, Majid and colleagues argue, shows that they find discussing odor much easier than their WEIRD counterparts.

Lastly, other recent work by Floyd and colleagues (2018) shows that abstract smell terms are not just an isolated case limited to South East Asia: The Cha’palaa language in Ecuador has at least 15 abstract smell terms. Importantly, Floyd and colleagues note these terms are a type of classifier previously thought not to exist. And Cha’palaa speakers discuss smell far more than other populations in the surrounding area.

These studies indicate that much more research is need into the cognitive cultural diversity in human olfactory sensory capacities, and to what extent they are penetrated and shaped by human language.

This is a text widget. The Text Widget allows you to add text or HTML to your sidebar. You can use a text widget to display text, links, images, HTML, or a combination of these. Edit them in the Widget section of the Customizer.
Loading Comments...